Dean Furman (born 22 June 1988) is a South African professional footballer who plays as a midfielder for SuperSport United and the South African national team.

He made his debut for the South African national team in the year 2012, representing them at two Africa Cup of Nations tournaments. 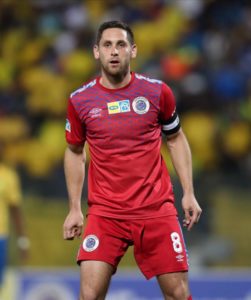 He tied the knot with his longtime girlfriend Natasha who he met in Manchester through a family friend. They had a colourful and beautiful wedding.

His father’s name is Ronnie Furman, while his mother is known as Carol Furman.

He is one of the highest-earning players in PSL. The SuperSport United player is paid R300,000.

Dean Furman has an estimated net worth of $1 million to $5 million which he has earned as a footballer.

He began his footballing career as a youth team player at English Premier League club, Chelsea. He left the club after failing to break through into the first team. On 10 May 2006, he signed for Rangers.

He made his professional debut for the club in a 3–1 win against Dundee United on 10 May 2008, as a 52nd-minute substitute for Kevin Thomson.

On the 18th of August 2015, Furman signed for South African side, SuperSport United on a two-year deal, with an option of a further year.

🚨🚨 Shirt Giveaway 🚨🚨 ‪Delighted to have reached our 3rd MTN8 final in a row with @supersport_unitedfc …To celebrate, I will be giving away my shirt from last nights game. To stand a chance of winning, follow me and like this photo. I will be choosing winner at random after the final. ⚽️