Evidence Makgopa (born 5 June 2000) is a South African soccer player who plays as a forward for South African Premier Division side Baroka and the South Africa national team. 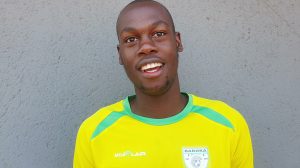 On February 23, 2020, he made his Tarok FC debut in a 2–2 Nedbank Cup draw with Hungry Lions; Makgopa scored the second goal as Tarok FC advanced to the next round of the competition after winning the penalty shoot-out.

He made his league debut in a 2–1 loss to Bloemfontein Celtic on March 1, 2020, and scored his first league goals for the club the following week in a 2–0 triumph against Black Leopards. During the 2019–20 season, he made 11 appearances for Baroka in all competitions, scoring 5 goals.

Makgopa made his South African debut as a substitute against Uganda on June 8, 2021, and scored a brace in a 3–2 victory.