Gwen Ramokgopa is the current MEC for Health in Gauteng, South Africa. She took the place of Qedani Mahlangu. 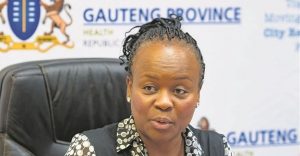 She served as executive mayor of the City of Tshwane Metropolitan Municipality from 2006 to 2010, and before that as Gauteng’s MEC for Health from 1998 to 2006.

She served as Deputy Minister of Health in the South African Government from November 2010 until May 2014, following her term as mayor of Tshwane.

She is the chancellor of the Tshwane University of Technology. In 1995, she was also the Chairperson of the former Pretoria City Council’s Executive Committee. She was born in Atteridgeville and earned her MBChB at MEDUNSA, which is located north of Pretoria.