Jack Devnarain (born 9 February 1971) is a South African actor who is best known for the roles in the television serials The Ghost and the Darkness, Isidingo and Mayfair. 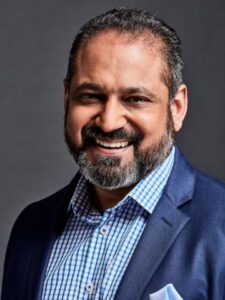 He was born on the 9th of February 1971 in Durban, South Africa. As of 2022, he is 51 years old and celebrates his birthday on February 9th every year.

He is married to Pam Devnarain and together they have two children.

In Durban, he began his acting career by performing in community theatre. He studied Law at the University of KwaZulu-Natal during this period and graduated in 1993.

He made his acting debut in 1996, playing a minor role in the film The Ghost and the Darkness. Then, in 1998, he starred in the hit television series Isidingo as ‘Rajesh Kumar,’ a supporting role that became really popular.

He joined the police force after graduating and worked in the Rapid Response and Crime Prevention divisions for nine years, becoming well-known for his arrests and convictions. During his busy legal life, he continued to star on tv, in the movies, and in the theatre.

Jack Devnarain has an estimated net worth of $200,000 which he has earned as an actor.