John Steenhuisen (born 25 March 1976) is a South African politician who has served as the leader of the Democratic Alliance since October 2019. 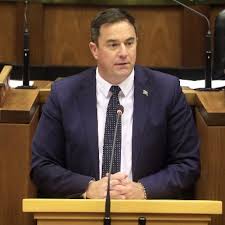 In 1993, Steenhuisen matriculated from Durban’s Northwood Boys’ High School, an English-medium high school. He went on to the London School of Economics and Political Science to study political science, although he never received a university diploma.

Steenhuisen was married to Julie Steenhuisen, a Durban native, for ten years. After Steenhuisen’s long-term infidelity was revealed, they separated in October 2010.

From his first marriage, Steenhuisen has two daughters. He is now married to Terry, with whom he has a daughter. He is bilingual (English and Afrikaans).

Steenhuisen was elected to the Durban City Council as a DP councillor representing Durban North at the age of 22 in 1999. At the time, he was the youngest member of the municipal council.

The eThekwini Metropolitan Municipality was established in the 2000 municipal election, and Steenhuisen was elected as a councillor for the newly constituted DA.

In 2009, he was elected as the Democratic Alliance’s KwaZulu-Natal provincial head at the party’s Provincial Congress. Steenhuisen held this position until October 24, 2010, when he declared his desire to quit on October 18th, following the revelation of an extramarital affair.

Steenhuisen declared his candidacy for the position of parliamentary leader to follow Maimane and was elected unopposed on October 27, 2019.