Keo Motsepe (born 24 November 1989) is a South African dancer. His dancing styles are Latin and Ballroom. He is known for being the first black professional dancer on the ABC show Dancing with the Stars. 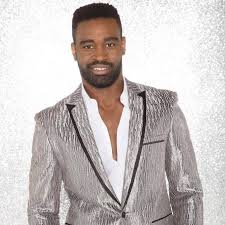 Motsepe started his career at 11 years of age by entering into in a competitive dance scene representing his country. In 2012 Motsepe joined the cast of Burn the Floor.

In 2014 it was announced that Motsepe would join the cast of pro dancers on Dancing with the Stars.

Dancing with the Stars

In season 19, Keo Motsepe was paired up with Olympic athlete Lolo Jones. They were eliminated during the first week of competition, finishing in 13th place.

In season 20, Motsepe was paired up with model Charlotte McKinney. They were eliminated in the third week of competition, finishing in 11th place.

For season 21, he paired with Grammy Award-winning singer Chaka Khan. They were the first couple eliminated on the second week of competition, finishing in 13th place.

For season 22, he was partnered with Full House and Fuller House actress Jodie Sweetin. The couple was eliminated in the eighth week of competition, despite being at the top of the leader board that week. They placed 6th overall.

In a surprise challenge, judge Bruno Tonioli worked with Sweetin and eventual-winner Nyle DiMarco and their professional partners. During the sequence, the two celebrities swapped partners, seeing DiMarco and Motsepe dance the tango in ballroom hold, with both men shirtless, and Mostsepe lift and twirl DiMarco. This was the first same-sex dancing included in the show’s franchise world-wide.

He returned to season 23 but as a troupe member.

For season 24, he returned as a pro dancer and was partnered with actress & comedienne Charo. They were eliminated in the third week of competition, finishing in 11th place.

Motsepe returned for season 25 and is paired with Shark Tank panelist, Barbara Corcoran. They were the first couple eliminated on the second week of competition, finishing in 13th place.

For season 26, he was partnered with former Olympic softball pitcher Jennie Finch Daigle. They were eliminated on the third week of competition and finished in 4th place, tying with Chris Mazdzer and Mirai Nagasu and partners Witney Carson and Alan Bersten.

For season 27, he was paired with Harry Potter actress Evanna Lynch. The couple made it to the finals where they finished in 3rd place, marking Motsepe’s best so far and also his first time in the finale.

Motsepe appeared in season 28 as a pro dancer but was not paired with a celebrity. He returned to compete again on season 29 where he is partnered with actress Anne Heche. They were eliminated in the fourth week of competition and finished in 13th place.

He has an estimated net worth of $2 million which he has earned form his career as a dancer.