Leeanda Reddy (born in Durban) is a South African actress known for her roles in the popular series Cape Town, Scandal! and Isidingo. 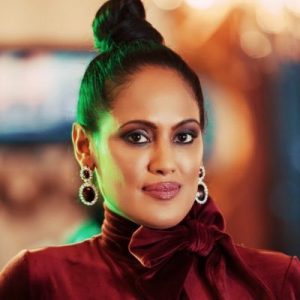 Crystal Point Secondary School was where she finished her education. After that, she earned a BA in Speech and Drama from the University of KwaZulu-Natal in Durban.

She is married to her longtime partner Clive Chetty. and together they have two sons: Yorke and Zion Chetty.

She began her acting career in theatrical shows at the Opera and Loft theaters in South Africa, as well as the Market and Civic theaters in Durban, Sneddon, and Grahamstown.

She co-starred in the famous comedy film Mr. Bones 2: Back from the Past with Leon Schuster in 2008. She is also the co-founder of ‘Mustard Seed Productions,’ a film production company she co-founded with her friend Krijay Govender in 2008. She played ‘Prevashnee’ in the play iNkaba in 2012.

She joined the cast of the renowned soap Isidingo in 2015, playing the part of ‘Priya Kumar.’ She was nominated for SAFTA’s Best Lead Actress award in 2016.