Liopelo Maphathe (born 1982 in Lesotho) is a South African actress and television presenter known for her role as Luyanda on the e.tv soapie Backstage. 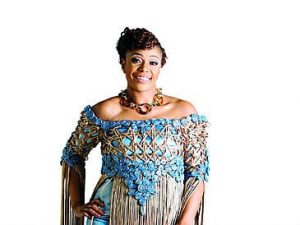 Liopelo graduated from the University of the Orange Free State with a degree in performing arts. She moved to Johannesburg following that and quickly obtained a starring role in the seSotho drama series Sergeant Kokobela.

She got the starring role of Luyanda on the now-defunct youth soap opera Backstage in 2000.

Muvhango, Crossroads, Gaz’lam, Jozi Streets, Scandal!, and Madam & Eve are some of the other television shows in which she has appeared. She also appeared in the short film Afrikano as The Bride.

She joined the SABC2 music show Afro Café as an insert presenter in September 2008.

On the SABC2 sitcom Moferefere Lenyalong, she played Lesego Matlakala, a stylista, fashionista, and Sugel.

In the eKasi+ sitcom Van ‘n Sit, she played Mpho, the last born and only daughter of the Ledwaba family, a royal affluent family, the Sepedi equivalent of the Setswana royal Bafokeng family.