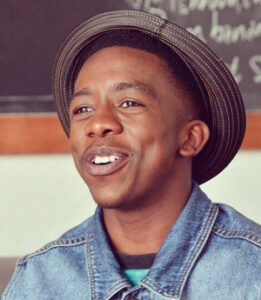 He was born on the 1st of December 1993 in Soweto, South Africa. As of 2021, he is 28 years old and celebrates his birthday on December 1st every year.

He attended West Ridge High, a High school in Roodepoort, South Africa, and matriculated in the year 2011.

His mother’s friend saw him in a school play when he was 12 years old and encouraged him to try acting. Justice for Everyone, Zero Tolerance, and Bay of Plenty were among his most notable roles.

After auditioning for the role of gang boss Slay, he was cast in Soul Buddyz. He also starred as Tsietsi Mashini in the 2011 film Winnie. Meeting Jennifer Husdon on set in the film was his favorite acting memory.

Aside from acting, he enjoys screenplay writing, photography, and directing. Mpho is passionate about the arts and wishes to contribute to the industry’s development in South Africa.

He starred as Lebo Ngcobo, a troubled, dark young man who is the younger brother of Axe and Jackson’s youngest son, in the e.tv drama series Z’bondiwe in 2015.

In 2016, he appeared in the e.tv telenovela Ring of Lies as Neo, a bare-knuckle boxing fighter who is discovered on the gritty streets of rural Limpopo by a well-known manager.