Randall Abrahams (born 26 July 1969) is a South African radio and television personality and an independent consultant known as “the bad judge” on the M-Net reality competition series Idols. 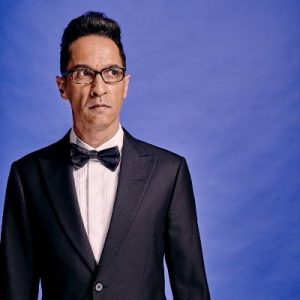 Harold Cressy High School was Randall’s alma mater. He studied at the University of Cape Town from 1988 to 1992, earning a Bachelor of Arts degree (Hons).

Fans believe that he is in a relationship with a woman whose name is Gabrielle Abrahams, but the radio and tv personality is yet to confirm this openly.

Randall Abrahams started as a programming assistant at Good Hope FM in 1992 and rose through the ranks to become station manager from 1994 to 1997. He relocated from Good Hope to Johannesburg, where he assisted in the establishment of the youth radio station Yfm, eventually becoming Station Manager, a post he held until 2002.

He was one of the initial judges of M-reality Net’s singing competition Idols, which was based on the worldwide formats Pop Idol and American Idol, and premiered in 2002. Since since, he has served as a judge on the show as “Mr. Nasty.”

In 2003, Randall served as a judge for the World Idols television competition, where Idols 1 champion Heinz Winckler came in fourth place.

He was the General Manager of Commercial Radio at the SABC from 2002 to 2006, and was responsible for the success of 5fm, Metro FM, and Good Hope FM.

He has worked as an independent consultant in the digital and PR industries since leaving the SABC, while continuing to work in television.

He also worked as a freelance journalist for Financial Mail, Tribute, Y Mag, Advantage, and Blink, among other publications.

He has also owned and managed the public relations agency Total Exposure, the events company Mushroom Productions, and the multimedia marketing firm RAMM.

Since October 2009, he has been a judge on SABC2’s reality show SA’s Got Talent, which is based on the British “Got Talent” formula.

He has an estimated net worth of $1 million which he has earned as a radio and television personality.