Shaun August (born in Cape Town) is a South African politician and former prison warden. He has been serving as a Member of the National Assembly of South Africa since May 2019. 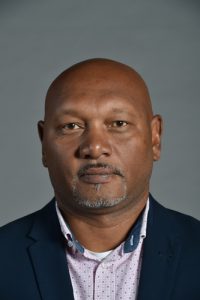 Shaun August first met Patricia de Lille while she was visiting the prison as part of an official parliamentary oversight mission. August joined the Independent Democrats the next year after De Lille founded the party in 2003. During the 2004 general election campaign, he became her bodyguard and traveled with her. In 2006, he was elected as the party’s deputy national organizer.

Following Grant Pascoe’s retirement in May 2014, August was appointed to the position of chief whip of the council. In the 2016 municipal elections, he was re-elected. From 2015 to 2017, August served as the DA’s metro chairperson.