Sonia Esgueira is a South African comedienne, actress and voice artist known on television for her role as Angelica in the drama series Jacob’s Cross, in 2011. 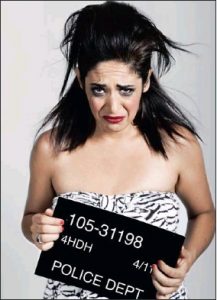 She is well known for her “Porra” trilogy of comedy plays, for which she earned the Fleur du Cap award for Best Supporting Actress in 2004 for her performance in Marthinus Basson’s Maynardville production of Two Gentlemen of Verona.

Flat Panic, Othello, Antigone, Madiba Magic, I Love You Lots and Lots, and Chapter One are some of the other theatre plays in which she has appeared.

In the science fiction television series Charlie Jade, she portrayed a stuntwoman, and in the 2004 comedy sketch show Fela’s TV, she played a variety of characters.

She’s also starred in The Last Straw, I’ll Take You by Force, and Dissonances.