Thato Moeng Sibiya (born 25 April 1986) is a South African sports presenter who started her career at Yfm and later moved to 5FM as the first black female sports reporter on the station. 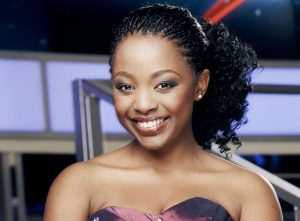 She attended the Tshwane University of Technology between 2006 and 2010 where she studied Journalism.

On 25 December 2016, she got married to her husband Dumisani Sibiya and together they have a daughter.

The presenter began her career as an intern at YFM, then after a few years, she went to 5FM, where she became the station’s first black and female sports host.

From 2011 to 2014, she worked at 5FM. She did, however, apply for a new sports show at SuperSport in 2010, and that is how she began hosting Thursday Night Live with Robert Marawa till 2019. Cynthia Chaka is someone she admires as well.

She presented Thato Moeng’s YO-TV sports show at some time in her career. In 2018, she signed a new deal with Johannesburg’s Vision View Sports Radio as the host of two shows, Morning Flow and NFD. The deal is still active, just like it was with Supersport.

She has an estimated net worth of $100,000 which she has earned as a sports presenter.