Mandla “Spaceboy” Maseko was a qualified Private Pilot, a Candidate Officer in the South African Air Force and a DJ. He was born on August 27, 1988 in Soshanguve, north of Pretoria, South Africa.

He was scheduled to travel on a sub-orbital trip to space that could have seen him become the first black African in space. Mandla, however, died in a motorbike accident on July 6, 2019 with the trip yet to happen at the time of his death. 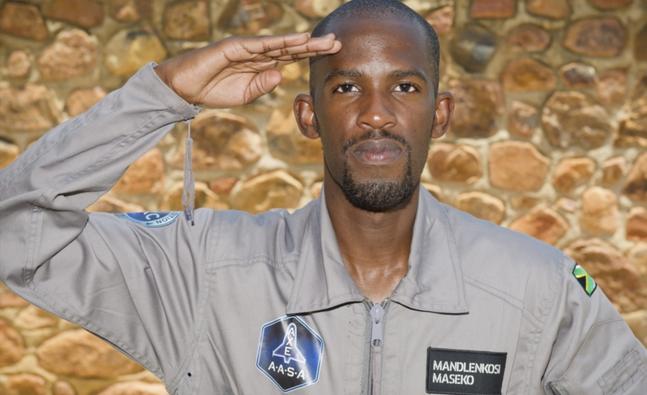 He was born and raised in a township, Mandla Maseko has spent his life at the mercy of the heavens. “Once it rains, the lights go out,” the 30-year-old once said. “I do know the life of a candle.”

He attended South African Air force College from July 13, 2015 to December 11, 2015. From this humblest of launchpads, Maseko poised to defy the laws of physical and political gravity by becoming the first black African in space.

Manda Maseko’s father was a school cleaner and auto tool maker in Soshanguve township near Pretoria.  His father who grew up in such poverty that he got his first pair of shoes when he was 16, was determined that his children would never go hungry.

Maseko and his four younger siblings were brought up in a simple brick house with access to electricity and running water. His provided for them and made sure they didnot go to bed without eating. Mandla Maseko’s father was his hero.

He was among 23 young people who saw off 1 million other entrants from around the world to emerge victorious in the Axe Apollo Space Academy competition. Their prize was to be blasted 62 miles up on a sub-orbital flight aboard a Lynx mark II shuttle in 2015.

After winning the Axe competition, he was selected to attend the Axe Apollo Space Academy (AASA). While at the AXE Apollo Space Academy, Mandla engaged in a series of missions that gave all recruits a taste of the thrills and trials faced by real astronauts.

Among the series of training missions, Mandla mastered piloting an Air Combat USA aircraft and braced himself for the strength of blast off in a G-Force Simulator at the Kennedy Space Center Visitor Complex.

Mandla Maseko did not get the opportunity to go to space before he died in 2019.

Where are you from?

I was born in SoShanguve, raised in Soshanguve and Mabopane. So I can safely say, I’m a Pretorian to the core.

Have you always had a fascination with Space?

After watching a movie called Apollo13, yes I was fascinated.

What is your favorite music?

All genres….but I love Hip Hop, whether it’s local/international.

What CD are you currently listening to at the moment?

What is your favorite movie?

Drumline by Nick Cannon. Reason being the message that it holds. And it goes like…”one band, one sound…when one of us looks or sound bad, we all look or sound bad”. It is our duty to make sure that we look out for each other, always.

What is your favorite meal?

Your favourite place to hangout/restaurant?

I like to hang out at home and if I had to go out, it’ll have to be Zygoz & Black Jeans, they’re both in Mabopane.

What are you most looking forward to about being in space?

Looking outside the window and seeing Earth as this small/big round blue & white ball, while we’re orbiting and experiencing weightlessness.

Which is your favourite place you have travelled to?

Zanzibar in Tanzania. That place feels like paradise. – Sthembile Gasa

Mandla Maseko Cause of Death