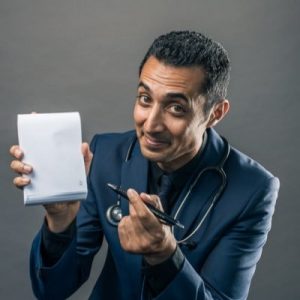 Until 1994, he was a student at South Peninsula High School. Moosa then spent six years studying medicine at the University of Cape Town Medical School, where he completed his internship in hospitals in Gauteng near Thokoza, as well as in Cape Town’s Groote Schuur and Khayelitsha.

He graduated from the University of Cape Town Medical School in 2001. He is a medical doctor and a general practitioner. He then worked as a doctor for three years.

During his fourth year at the University of Cape Town, Moosa began doing stand-up comedy on campus. He began performing stand-up at the Cape Comedy Collective’s free Comedy Lab seminars, and two months later, he was named the winner of the “One City, Many Comics Talent Competition,” which was held in conjunction with the One City Festival in September 1999.

On the E-News channel’s satirical news program Late Nite News with Loyiso Gola, Moosa is a regular presenter of a segment called The Second Opinion – with Dr Riaad Moosa. He has appeared in a number of television and cinema projects.

He has an estimated net worth of $400,000 which he has earned as a comedian, actor, and doctor.