Sarahann Doherty is a South African actress, singer and dancer known for her role as nursing sister Roelien Verwey-Koster in the M-Net drama/soapie Binneland Sub Judice, from 2005-2008. 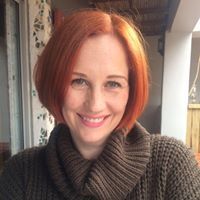 Sarahann Doherty has been on television in the Lifetime Network’s What Would You Do in the character of Allyson. She also appeared as Dr. Tilley in the SABC3 soap Isidingo as a guest star.

She hosted the programmes Mini TV (a children’s show) and Afrikaans for Africa, as well as the music show X.

In 2005, she was cast as the sassy nurse Roelien Verwey in Binnelanders, M-first Net’s original drama series, which premiered in October of that year.

She returned for the second and third seasons, but on November 20, 2007, it was revealed that she would not be renewing her contract after the third season.

She remained on the show until the third season, which finished in 2008.