Initially, an a cappella group, guitarist Polycarp Otieno joined before they named themselves Sauti.

Sauti Sol released their debut studio album Mwanzo on 1 November 2008, to critical acclaim. Their second studio album, Sol Filosofia, was released on 25 February 2011, earning the group a number of accolades and nominations in the process.

On 18 June 2012, the band released a self-titled extended play in collaboration with South African rapper and record producer Spoek Mathambo. Their third studio album, Live and Die in Afrika, was released online on 21 November 2015 as a free download, available for 48 hours as an early Christmas present. 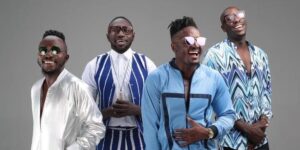 The band has had several successful tours in Africa and Europe, topped Kenyan charts and gained international attention with shows in Europe and the US, as well as television appearances and various accolades and nominations, including their 2011 concert performance in Kenya with South African a cappella group Ladysmith Black Mambazo.

The band was formed in 2005 as an a cappella group by Baraza, Chimano and Savara, who had met at the Upper Hill High School and performed in Voices in the Light, a music group at the school. They then met guitarist Otieno, who attended Strathmore School, at the Alliance française in Nairobi, where they would frequent and decided to form Sauti (Swahili for “sound”) and immediately wrote their first song, “Mafunzo ya Dunia” (Literally: lessons of the world), which would later feature in their debut studio album Mwanzo.

The band later added the Spanish word “Sol” (sun) to their name and formed Sauti Sol (supposed to mean “voices in the sun”). In 2006, the band participated in the Spotlight on Kenyan Music competition, hosted by the Alliance française in Nairobi. They were included in the album compilation recording and later got signed to Penya Records.

Sauti Sol released their debut studio album Mwanzo on 4 August 2009, via their record label Penya Records, to critical acclaim, and followed up with their second studio album Sol Filosofia two years later. The music video for the album’s second single, “Coming Home”, earned them the Best Music Video award at the 2011 Kisima Music Awards, with the group itself also winning the Best Fusion Artist/Group of the Year award.

In July 2012, Sauti Sol released a self-titled extended play, a collaborative effort with South African rapper and record-producer Spoek Mathambo, who produced the EP in Nairobi and Johannesburg. The music video for its lead single, “Range Rover”, was shot at the Hembrug in Zaandam, Netherlands, in an old ammunition factory that is now an official cultural heritage site popularly referred to as “the cathedral”.

Kenyan singer Dela, who previously collaborated with the band “Mama papa” from Mwanzo, appeared in the song “Slow”, which also features Mathambo. Its music video was shot in Amsterdam. The band then released “Love or Leave” as the EP’s second single, with its music video also shot in Amsterdam during the band’s stop in the city as part of their European tour in 2012.

Their song “Gentleman” with rap group P-Unit earned them a nomination for the “Teeniez’ Group or Collabo” award at the 2012 Chaguo La Teeniez Awards, losing out to alternative hip hop group Camp Mulla. It was the second time they were nominated for the award, losing to P-Unit the previous year.

Sauti Sol’s recognition continued to rise in 2012, as they were nominated for and won the Most Gifted East African award at the 2012 Channel O Music Video Awards for their song “Shukuru” with Tanzanian rapper AY.

On 29 April 2014, the band released “Nishike”. Its music video caused an uproar in the media due to its steamy content, and ended up getting banned from most local TV stations. Baraza later expressed his anger with the ban, stating that he refuses “to be a secular artist boxed by society to restrict my freedom of expression.” They received a nomination for the Best Group award at the 2014 MTV Africa Music Awards, but eventually lost out South African group Mafikizolo. The music video has received a 2014 Nomination as East Africa’s Most Gifted Video by Channel O Music Video Awards.

After “Nishike”, Sauti Sol released their third studio album, Live and Die in Afrika. The album, released online on 21 November 2015, was available to Sauti Sol fans globally for free download (48 hours) as an early Christmas present. The album was released under their imprint label Sauti Sol Entertainment as a self-produced work by Sauti Sol for Sauti Sol. A total of 400,000 downloads were made during the free download period.

The band released their fourth single off Live and Die in Afrika entitled “Sura Yako” (Your Face). This was introduced by a spin-off Lipala dance competition run on Instagram that sparked an online dance movement in Africa and across the globe. Following the success of the competition, the band released the single’s music video on 12 September 2014.

The album comprises 13 tracks and was supported by the previously released singles “Melanin”, “Girl Next Door”, “Afrikan Star”, “Short N Sweet” and “Tujiangalie”. Sauti Sol described the album as an “art and cultural exchange” project and said it would be released towards the end of 2017. They also announced plans to release a new track with a different African artist every month. However, this plan did not materialize due to financial constraints.

Sauti Sol’s fifth studio album Midnight Train was released on 5 June 2020. The album features guest artists from Africa. The artists include Burna Boy, Sho Madjozi and India Arie. The album’s lead single “Suzanna” was released on 7 February 2020. Sauti Sol recorded five different versions of the song before settling on the one they released. The accompanying music video for “Suzanna” was shot in Lagos, Nigeria.

The band members have named musicians such as Fadhili William, Daudi Kabaka and other established African artists such as Salif Keita, Lokua Kanza and Fally Ipupa, as well as British band Coldplay and American singer Jason Mraz as their influences.

They have an estimated net worth of $10 million which they have earned as musicians.