Sjava whose real name is Jabulani Hadebe is a popular South African award-winning recording artist and actor that hails from Johannesburg, South Africa. He was born on the 2nd of December 1984 in Bergville, KwaZulu Natal, South Africa.

It was in 2015 that he rose to fame after the high success of Miss Pru’s debut single, “Ameni” which featured him on the catchy chorus. He is currently signed to Ambitiouz Entertainment. 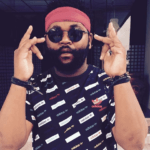