Tshilidzi Marwala (born 28 July 1971) is a South African mechanical engineer and computer scientist who is currently Vice-Chancellor and Principal of the University of Johannesburg with effect from 1 January 2018. 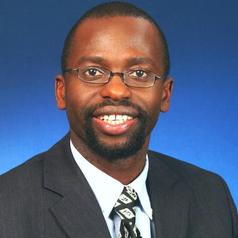 In 1989, he graduated from Mbilwi Secondary School after attending Dimani Agricultural High School. Marwala won the National Youth Science Olympiad during his matriculation year and was sent to the United Kingdom to participate in the London International Youth Science Fortnight.

He is married to Jabulile Vuyiswa Manana and together they have three children.

He was a non-executive director of the State Information Technology Agency (Pty) Ltd and the Chair of the Local Loop Unbundling Committee.

Tshilidzi Marwala has served on the Bradlow Foundation and the Carl and Emily Fuchs Foundation’s boards of trustees. He was awarded the Order of Mapungubwe, and his doctorate student Fulufhelo Nelwamondo was also given this honor. He was the first African engineer to receive the President Award from the South African National Research Foundation.

He has an estimated net worth of $500,000 which he has earned as a professor.