Duduzile Ngcobo (born 1967) is a South African actress known for her role Babekazi on Uzalo and her lead role Dr.Qwabe on the new show Durban Gen. 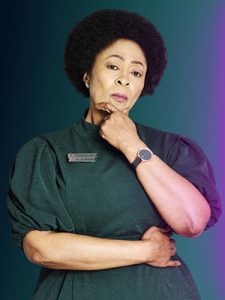 Duduzile has appeared in a number of television shows, films, and television commercials. Mrs. Duduzile is a fantastic actress who was clearly born to perform.

Her first main part was on Isithembiso, and she has also been in supporting roles on Ikhaya Season 2, Greed and Desire, Ehostela as a Mayor, and Babekazi on Uzalo.

She also appeared in Muvhango as Ma-Mbatha and the Scam as Mazulu in supporting roles. Mrs. Duduzile was cast as Dr. Nomalanga Qwabe on Durban Gen in 2020.