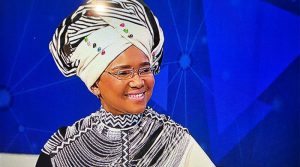 She was  born on the 8th of October 1960 in in Lady Frere Hospital. As of 2021, she is 61 years old and celebrates her birthday on October 8th every year.

Noxolo Grootboom began her illustrious career as a typist at the South African Broadcasting Corporation (SABC). Noxolo, who had no prior experience in journalism, saw her current job as an opportunity to accomplish more.

She was promoted to the newsroom after performing so well. This provided her with the opportunity to work as a news anchor on the Xhosa news desk.

She was acknowledged for doing an outstanding job as a translator, in addition to being a fantastic storyteller. Her distinct sense of humour endeared her to audiences.

She was rumored to have had a big influence on viewers who didn’t comprehend isiXhosa. She also had a penchant for analogies, which made her a fascinating observer.

Shr has an estimated net worth of $300,000 which she has earned as a broadcaster.